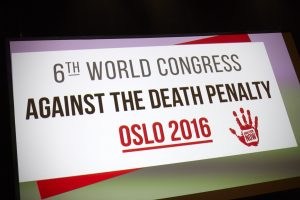 CONGRESS AGAINST THE DEATH PENALTY

The World Congress Against the Death Penalty


This latest global meeting about abolition therefore brought together approximately 1,500 people from more than 120 countries. A number of important figures came for the occasion, including the UN High Commissioner for Human Rights, 18 members of governments, 30 parliamentarians and ECPM’s Honorary President and former French Minister of Justice, Robert Badinter.


Focusing on Asia and the work of lawyers, this Congress was an opportunity to look more closely at a number of issues surrounding the death penalty across the world. On the agenda were terrorism, new strategies to be adopted and the involvement of national human rights institutions in combating capital punishment.

The Regional Congresses Against the Death Penalty

Although uniting abolitionists is a key task, it is nonetheless essential to ensure a presence in the field in those countries which still use the death penalty. Since 2012, ECPM has therefore organised regional congresses on the death penalty in strategic areas (Morocco for the MENA region in 2012, Malaysia for Asia in 2015).


These events specifically aim to help abolitionists from the same region meet one another so that new strategies closely related to the local context can be drawn up. By organising regional congresses, ECPM also ensures, for a few days at least, that the debate on capital punishment is heard in those places where it still strikes.


Please visit the archives of the Congress website for more information.

The money received through donations to ECPM is used to run our organisation. It allows us to hire professionals whose job is to train, plead and unite people around the value of justice that is the abolition of the death penalty. This money allows us to organise free training courses in schools, focusing on human rights and the death penalty; it also allows us to create educational tools which are then put at teachers’ disposal. Furthermore, it helps us to lead support campaigns, like the one we implemented around Serge Atlaoui.  Finally, it will make it easier for us to organise fact-finding missions and to publish their results, such as our annual report on the death penalty in Iran.